Why you Must Visit Lake Titicaca Now!

Peru is a vast country and home to many cultures. While most backpackers and sightseers go to Machu Picchu (and it is a must to see and discover), there is another attraction in Peru that you cannot postpone experiencing while it still exists: The Floating Islands of Lake Titicaca.

Lake Titicaca, the highest navigable lake in the world, is situated in the Andes on the border between Bolivia and Peru’s Puno District, and accessible from either country. The Uro, an ancient civilization, were driven off their lands by the Inca, who invaded the region centuries ago. Rather than abandoning their environs, the Uro tribe moved onto the lake, using the lake’s plentiful totora cattail type rushes to build curious floating islands, houses, furniture and canoes. 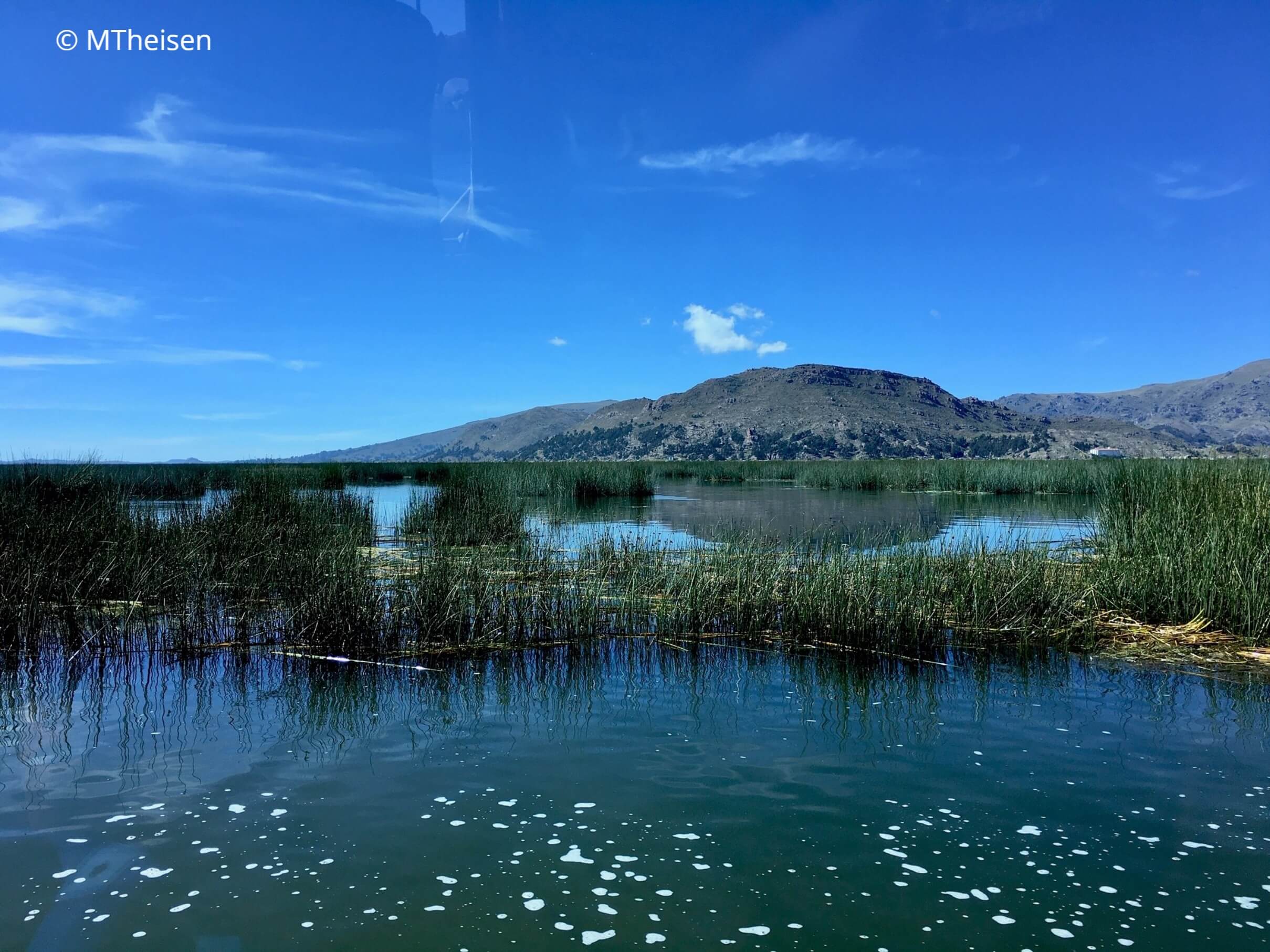 The islands were originally mobile to allow the Uro to flee the Inca. Now, they are moored to the lake bed in order to maintain a constant position.

As the reeds rot and disintegrate from the bottom of the island, more are added to the top to maintain a thickness of well over 8 feet. The surface is soft and spongy, which accounts for the characteristic sailor’s walk the residents exhibit when they visit the towns.

I detect the smells of humid decaying reeds as I attempt to walk about the springy island. It’s a bit like a stroll on a waterbed. As I enter the sparsely furnished homes, I am struck by how simply they subsist—a wooden table next to a loom of colorful wool; a layer of stones to insulate the reeds from cooking fires; a wire that serves as a wardrobe featuring brightly colored neon wool shirts and skirts. And yet I also notice some modern updates: a solar panel, a modem… 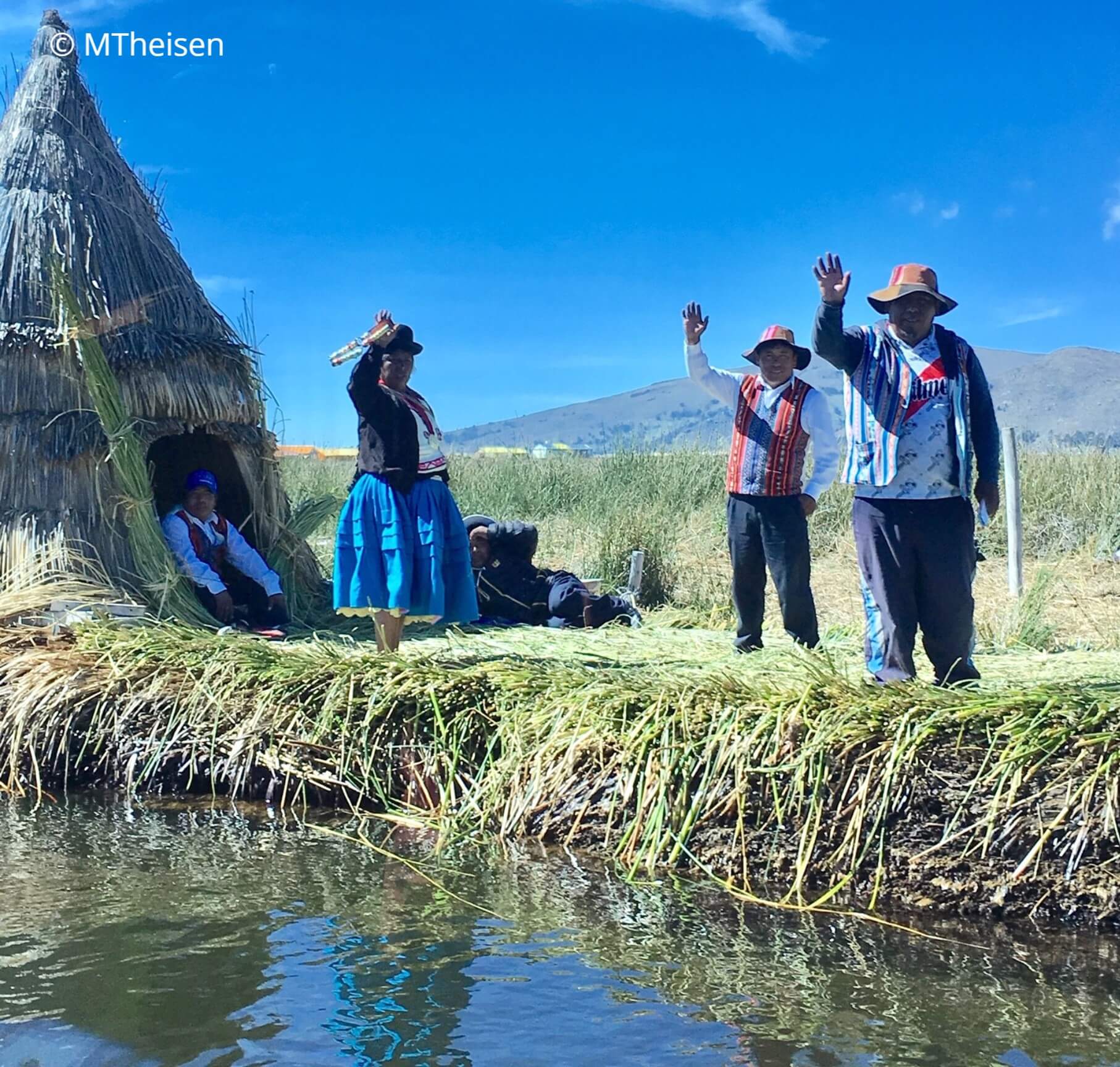 I see many women, few men, and no children and wonder “where are the children?” I learn the men are fishing and collecting lake plants, shore birds and eggs, on which the Uro have subsisted on from the beginning.

The women wear derby hats, and cheerful outfits in bright, neon colors, which contrast nicely with their olive skin and long, black braids.

These cheerful ladies sing songs to our group in Spanish, Quechua, English and Aymara—even a round of the French folk song Frere Jacques. I am conflicted. I know that tourism helps them to survive so they may continue this traditional lifestyle, but saddened that they have to put on these performances. 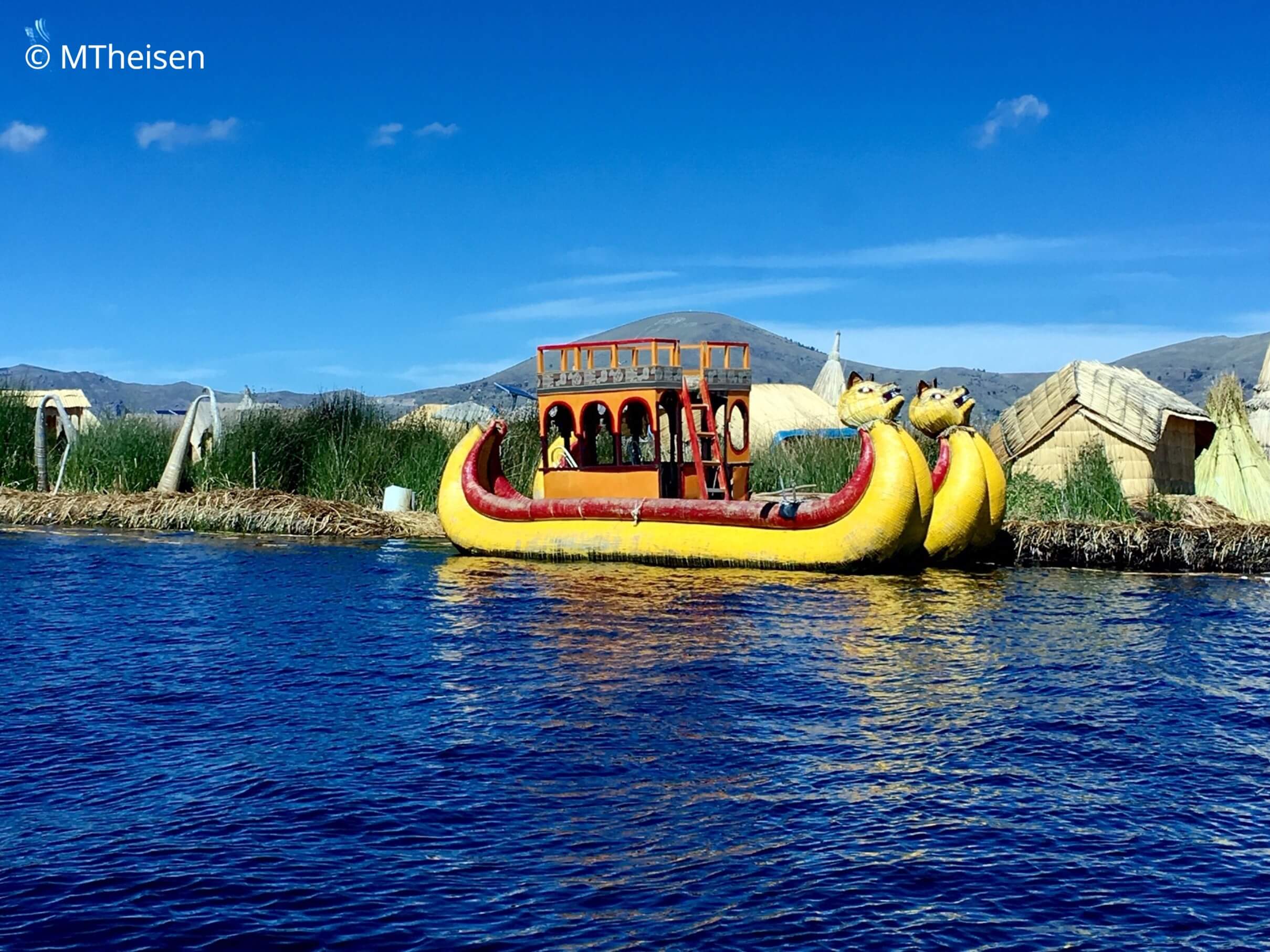 I find the boats to be particularly charming. They too are built from reeds and shaped like canoes, with animal heads at the prow. Therefore they also disintegrate and must be replaced frequently. The singing continues as we are poled through the shallow waters past another island with a watchtower, whose residents smile and wave. This vessel somehow feels firmer than the island, but it just looks like a huge wicker basket! 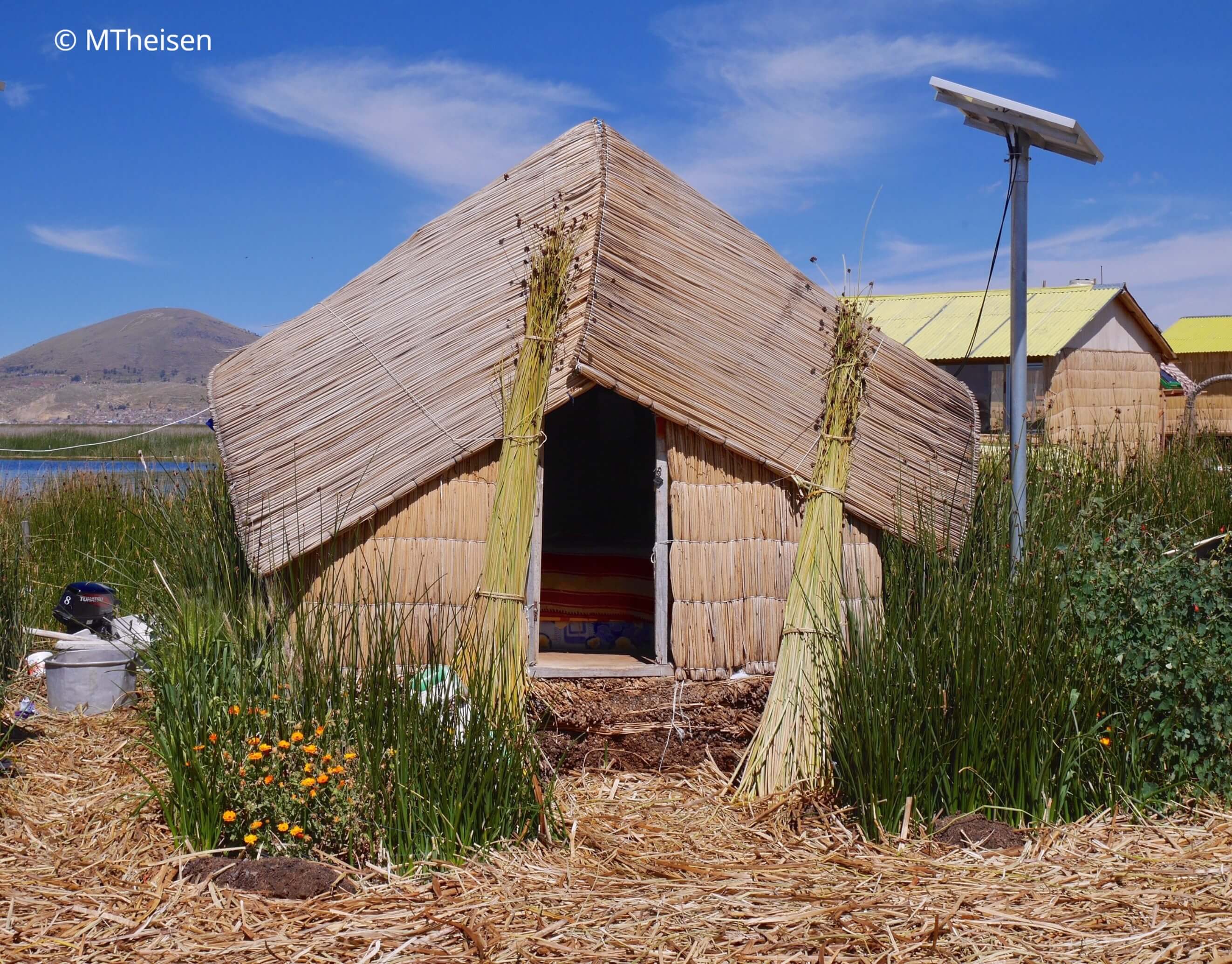 According to their legends, the Uro, who call themselves be kot-suña, or people of the lake, existed before the sun, when the earth was dark and cold. They were immune to being struck by lightening or drowning, until they mixed with humans (the local Aymara people) and lost their super powers. Their own identity, language and customs also perished when they intermarried with the Aymara. The Uro language died, and they now speak Aymara. But these are only a few things that are vanishing here… 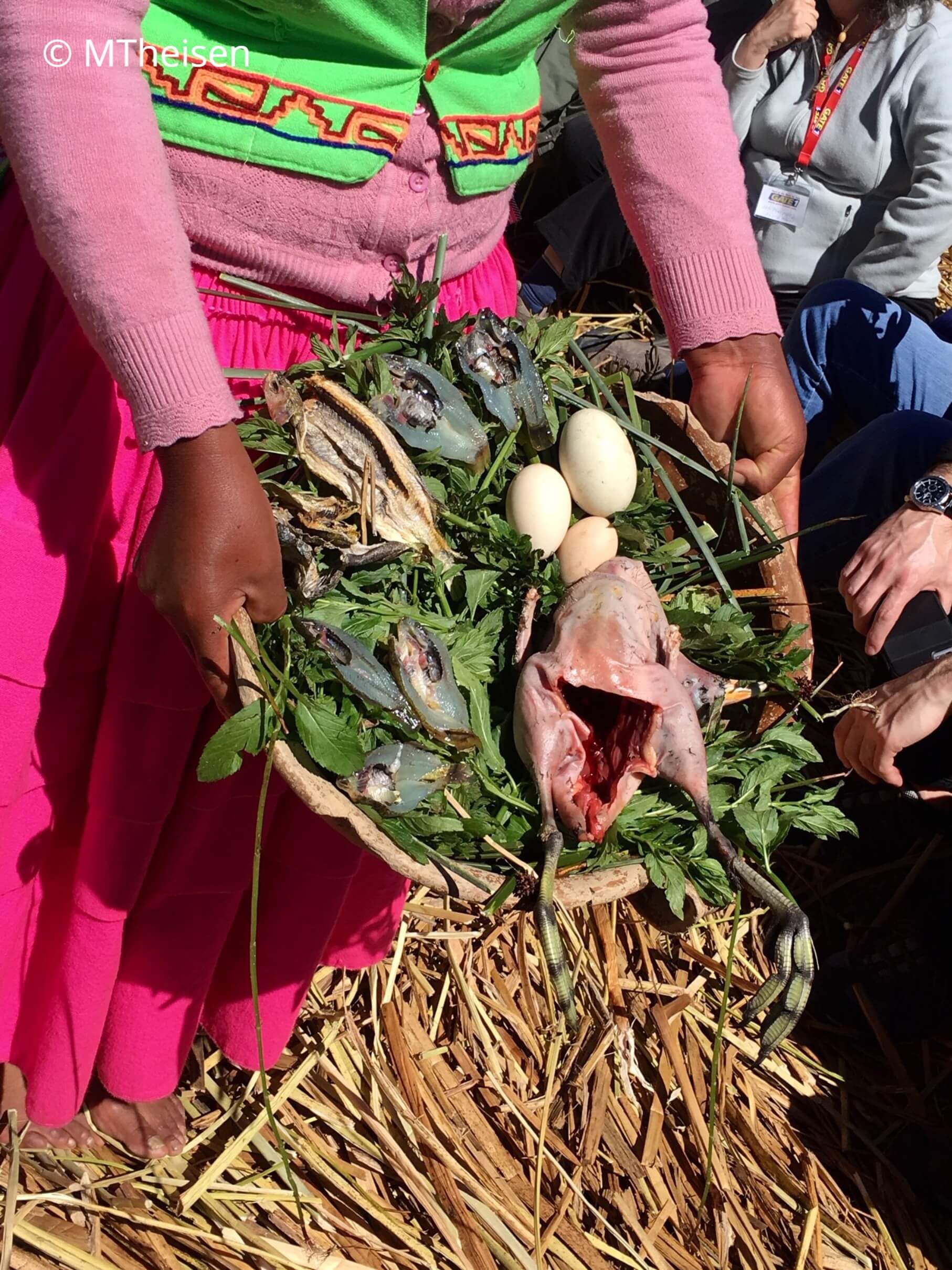 The good news is, the islands are part of the Titicaca National Reserve, initiated in 1978 to preserve the marsh reeds, 60 species of native birds, 18 native amphibians, and certain endemic fish. The floating islands are also protected.

The bad news is the lake is polluted with sewage, affecting the drinking water and food supply of the Uro. They develop diet related diseases early in life. 70% of the children attend schools in Puno or elsewhere; as they mix with outsiders and learn about the modern world, the choose to marry and work in the cities. The tribe and its ways are fading…

I reflect on the words I use in this article: decaying, rotting, declining, perishing, dying, vanishing, disintegrating, fading… and I feel such sadness. Another truly unique culture is disappearing from this planet. While I regret I had to take a commercial tour to discover and understand the Uro and their Floating Islands, I am exceedingly grateful to have had the opportunity while they still exist. 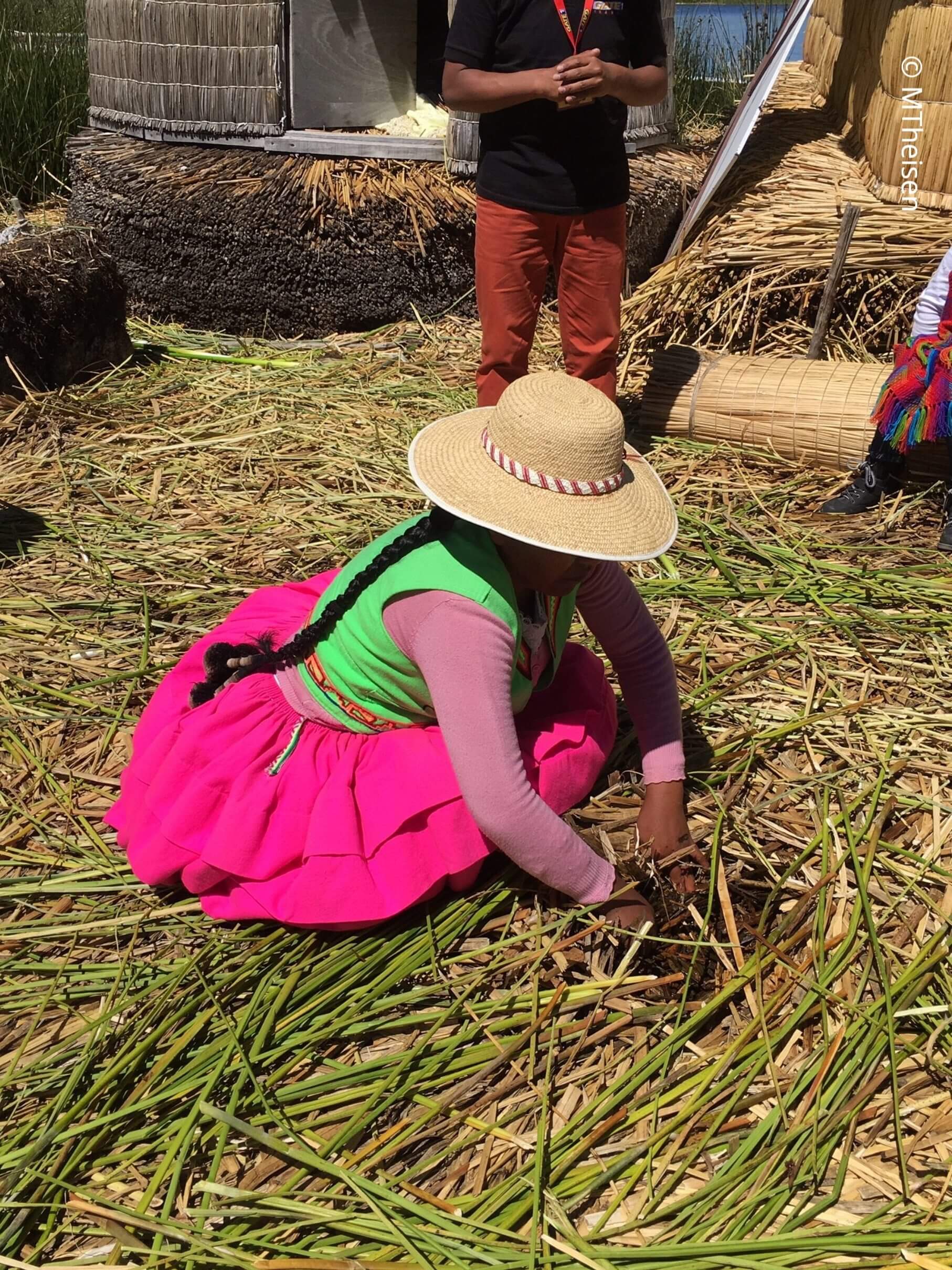 Please take the opportunity while you can!

This site uses Akismet to reduce spam. Learn how your comment data is processed.

Nice to Meet You!

I stopped working, sold my house on Maui and bought a sailboat after a lifelong Psychotherapy career. I married a British man, lived in France and now Croatia and travel like a maniac! No place is off limits for a flight, road trip, or sailing voyage. And I still manage to work sometimes. It takes a lot of juggling, but it sure is exciting. Welcome to my crazy world! I hope you enjoy the journey.